Friendsgiving means spending time with friends you’ve chosen, not the family that’s been forced upon you. Where conversation is light and fun, food is abundant, and alcohol is in mass quantities. Instead of trying to impress your friends with weird, complicated Pinterest recipes that will most likely end up looking nothing like the photos, get them sufficiently buzzed on some delicious Friendsgiving cocktails. We teamed up with BACARDI and SMIRNOFF to bring you 6 easy recipes that you and your friends will definitely be thankful for.

This punch will appeal to everyone from the pickiest spirits aficionado to the casual beer drinker. Directions: In a large punch bowl, combine all ingredients with an ice block. Garnish with cinnamon sticks and apple slices. Serve on the rocks.

This cocktail is an impressive yet straightforward drink to sip on this Friendsgiving. 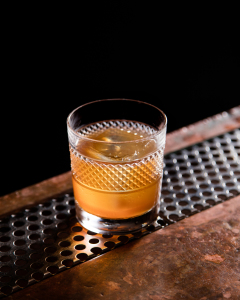 Made with BANKS 7 Golden Age Rum, it is a complex, full flavored drink with a dryer flavor than most Golden Rum cocktails.

Directions: Stir with ice and strain into a double old-fashioned glass filled with one large cube. This cocktail is for the minimalist. No need to stalk up on fancy ingredients. The Original Moscow Mule is perfected with only three, making it the perfect cocktail to bring to holiday gatherings.

Directions: In a copper mug with ice, add SMIRNOFF No. 21 vodka, ginger beer and a squeeze of lime and stir. Garnish with a fresh lime slice.

This is for the whole squad. Whether it’s time for brunch, watching football or enjoyed a slice (or three) of apple pie. (Courtesy of Megan Marlowe, Strawberry Blondie Kitchen). For those who prefer to drink their dessert, this one’s for you. Out with the apple pie, in with the apple cocktail! (Courtesy of Kendra Darr, Simply Darrling)

Directions: In a cocktail shaker, combine the Smirnoff vodka, ginger beer, apple cider and simple syrup and shake. Then rim a copper mug with caramel sauce. Pour cocktail over ice into the copper mug and garnish with an apple slice. For those who love the heat, this is a kicked up version of the original Moscow Mule, incorporating Serrano peppers and fresh mint sprigs for a surprising twist. (Courtesy of Annette Vartanian, A Vintage Splendor)

Directions: Put cupper mugs in freezer for 5 minutes to chill. Squeeze lime juice and drop in 1-2 Serrano pepper slices in copper mug. Use the back of a wooden spoon to muddle together the Serrano slices and lime juice. Pour in vodka and stir. Fill copper mug with ice and top off the ginger beer. Serve with additional Serrano slices, a lime wedge, and a mint sprig for garnish.